Moving from PC to Mac: The Background 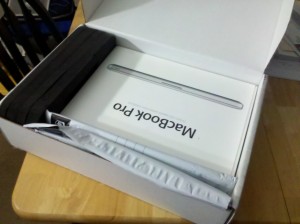 I’ve been using a PC since before Microsoft released Windows. I worked on Windows 3.1, played a bit with Windows ’95 and ’98, and didn’t even mind Windows ME (even though it didn’t have proper USB support). Windows XP was good to me. I managed to dodge the hell that is Vista, and I am quite happy with most of Windows 7 (although I still think XP did a few things better).

I have managed high-end CAD installations on Unix (HP-UX and AIX) and toyed with Ubuntu Linux at home. I would probably still be running a Linux version if I had been able to find a driver for the wireless card in my old laptop.

However, Apple and I have never gotten along terribly well. They just think differently. My first bad experience occurred in college when I was trying to help a church group manage some files on their fresh, sparkly little Apple. I think I made things worse, and they ended up reinstalling the software.

Over the years, my opinion of Mac users solidified: They must be mentally deficient, and Apple sells mice with only one button because their users can’t tell right from left.

More recently, I have struggled with the interface while helping clients configure email. Where is the right click? How do I switch between open applications? It was frustrating.

Fast forward to 2009-2010, when I started getting into doing websites. I kept seeing video tutorials created on a Mac. Friends who develop software are more in your face on the “Mac experience” than a 64-year-old grandmother with pictures of her first grandchild. Speakers at conferences appear to seamlessly jump back and forth between editor and webpages on their Macs. I would find software with great developer tools that only run on a Mac.

The seed was there. It was finally planted when the motherboard in my Dell laptop finally went toes-up in December 2010. My buddy assured me that it wasn’t worth the money to fix it, and I started hunting for a replacement. I didn’t have the cash for a new laptop right away, so I made do with a loaner.

A friend asked me about my budget, then connected me with a friend of his who was selling his gently used, still-with-original packaging 13-inch Macbook Pro.

I did some research. I asked on Twitter and Facebook for input from people who had switched from a PC to the Mac. Amidst the obligatory fanboy replies (“Once you go Mac…”) I received a few helpful pieces of information.

Joe: JUST. DO. IT. I made the switch a few years back and I now use my pc laptop as a cross between a paperweight and a glorified / over powered netbook.
Me: Joe, how was the learning curve? I know you weren’t 100% productive out of the gate.
Joe: Honestly, once I got used to the gestures. I was in it to win it. learning curve was pretty short. Apple has tons of stuff online to answer any questions when you have them.

That was helpful: It acknowledges that people have questions.

Another friend replied on Twitter, “I’ve gone back and forth for years. PC –> Mac gets frustrating if you’re a skilled Windows user. You feel a bit hobbled.”

Hmm, that’s me. This could be interesting. Then I found that the price for this particular machine was very fair, and I figured I could probably resell it for what I paid if it doesn’t work out. I took the deal, then sat back to wait for UPS to knock.

Three days after clicking “OK” on PayPal, Twitter brought me a link to someone else who recently made the switch. Jeff wrote about his thinking, the steps he took, and the annoyances he faced. The comments, especially the later ones, are filled with suggestions for add-ons and applications and tweaks to improve the software. (Careful readers will note that the Mac OS-X is not perfect out-of-the-box).

My new toy tool arrived in the middle of a very busy week. It was late evening before I could open the package, but it booted. I tweeted, ‘It’s here, it’s sleek, and it boots. It’s also missing keys (no Home/End,PgUp/PgDn?), and WTF is “Finder”?’

Now I have to figure out how to use it. Come back to read my adventures.

(Written on a PC)

This entry was posted in PC to Mac. Bookmark the permalink.

3 Responses to Moving from PC to Mac: The Background